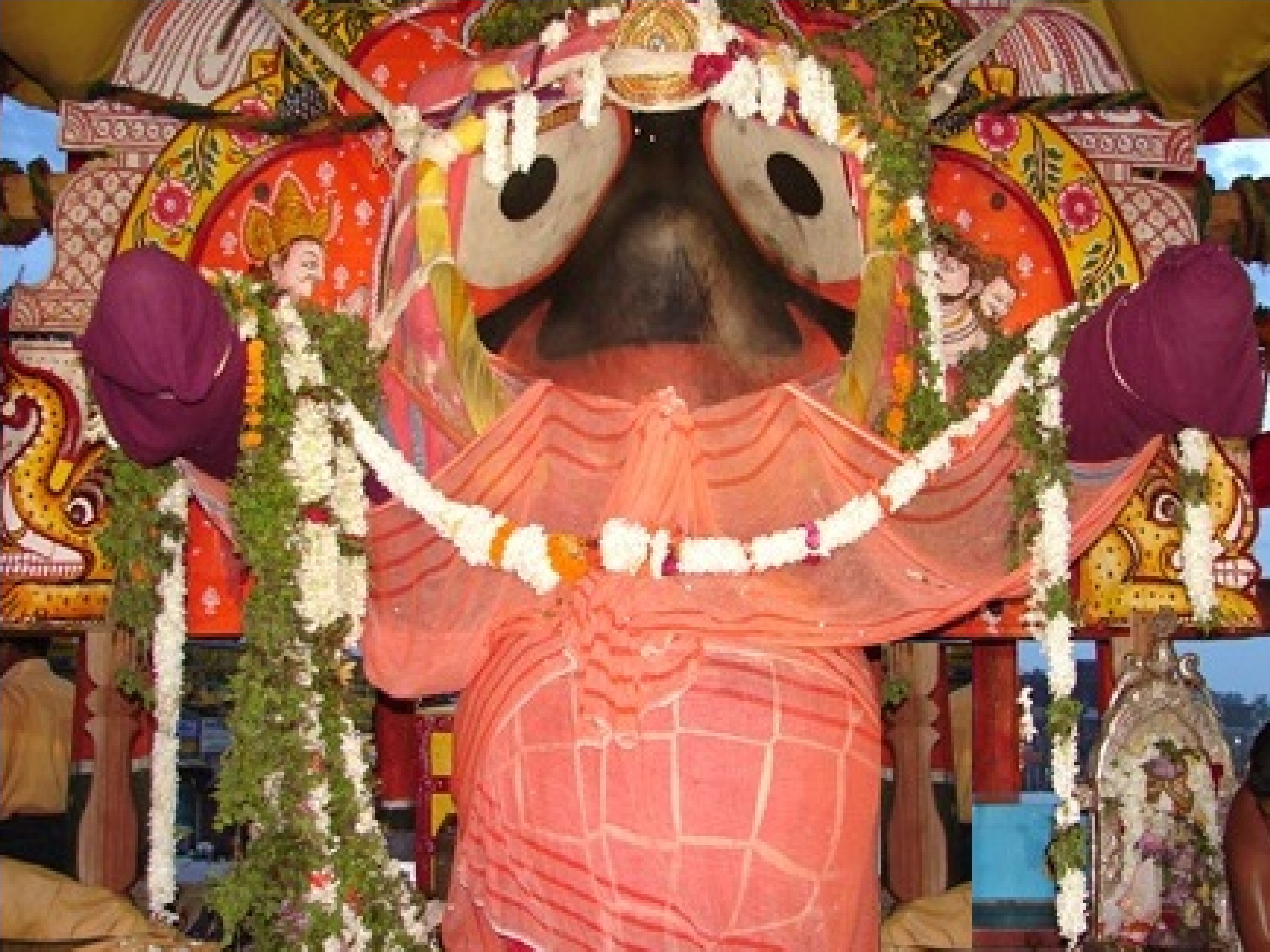 Jagannath (; ; formerly ) is a deity worshipped in regional Hindu traditions in India and Bangladesh as part of a triad along with his brother Balabhadra and sister, devi Subhadra. Jagannath within Odia Hinduism is the supreme god, ''Purushottama'', ''Para Brahman''. To most Vaishnava Hindus, particularly the Krishnaites, Jagannath is an abstract representation of Krishna, and Mahavishnu, sometimes as the avatar of Krishna or Vishnu. To some Shaiva and Shakta Hindus, he is a symmetry-filled tantric form of Bhairava, a fierce manifestation of Shiva associated with annihilation.

The Jagannathism ( Odia Vaishnavism)—the particular sector of Jagannath as a major deity—was emerged in the Early Middle Ages and later became an independent state regional temple-centered tradition of Krishnaism/Vaishnavism.

The icon of Jagannath is a carved and decorated wooden stump with large round eyes and a symmetric face, and the icon has a conspicuous absence of hands or legs. The worship procedures, sacraments and rituals associated with Jagannath are syncretic and include rites that are uncommon in Hinduism. Unusually, the icon is made of wood and replaced with a new one at regular intervals.

The origin and evolution of Jagannath worship is unclear. Some scholars interpret hymn 10.155.3 of the ''Rigveda'' as a possible origin, but others disagree and state that it is a syncretic/synthetic deity with tribal roots. The English word ''juggernaut'' comes from the negative image of the deity presented by Christian missionaries in the 18th and 19th centuries.

Jagannath is considered a non-sectarian deity. He is significant regionally in the Indian states of Odisha, Chhattisgarh, West Bengal, Jharkhand, Bihar, Gujarat, Assam, Manipur and Tripura. He is also significant to the Hindus of Bangladesh. The Jagannath temple in Puri, Odisha is particularly significant in Vaishnavism, and is regarded as one of the Char Dham pilgrimage sites in India. The Jagannath temple is massive, over high in the ''Nagara'' Hindu temple style, and one of the best surviving specimens of Kalinga architecture, namely Odisha art and architecture. It has been one of the major pilgrimage destinations for Hindus since about 800 CE.

The annual festival called the Ratha yatra celebrated in June or July every year in eastern states of India is dedicated to Jagannath. His image, along with the other two associated deities, is ceremoniously brought out of the sacrosanctum (Garbhagriha) of his chief temple in Jagannath Puri (Odia: ''Bada Deula''). They are placed in a chariot which is then pulled by numerous volunteers to the Gundicha Temple, (located at a distance of nearly ). They stay there for a few days, after which they are returned to the main temple. Coinciding with the Ratha Yatra festival at Puri, similar processions are organized at Jagannath temples throughout the world. During the festive public procession of Jagannath in Puri lakhs of devotees visit Puri to see Lord Jagganath in chariot. Provided by Wikipedia